A funny thing happened on the way to Zanarkand: Final Fantasy X (PS2) So there I am, having killed Seymour (again, maybe) and approaching the 'point of no return' - you know, that point in JRPGs where the world suddenly opens up and you're given free reign to explore and grind and snowboard and unlock ultimate weapons through absurdly time-consuming quests while the final boss waits patiently for you to come slaughter him. Tidus has just passed out and a lot of mumbo-jumbo was spouted about 'fayth' (gotta love Square's stupidly fanciful localizations), dreams, Sin, etc. The cut scenes are getting longer and more frequent, as they're wont to do when the game's main quest winds down and prepares hashed-together answers for all those, ahem, deeply intriguing mysteries.

Then Yuna drops a sphere - the game's superfluous doodad which serves as an excuse for flashbacks. Here we go again...

About halfway through the main quest, we, through the eyes of audience-proxy Tidus, learn that Yuna's pilgrimage will ultimately end in her death. The sphere she drops is something of a will, or maybe just a monologue of memories. She goes through each individual guardian, recalling how they met and what each party member means to her. Well, alright. I'm enjoying my time with the game - one of the few Final Fantasy titles I haven't replayed, first having played it when it was released in 2001 - but its linearity has grown stifling and the narrative has begun to bore me, and then the strangest thing happens...

That scene moved me. Finally, nearly 40 hours into the game, Hedy Burress (who plays Yuna) moves beyond the stilted, breathy way of speaking she's used for, I dunno, the entire game, and finally, finally sounds like a real human being who actually emotes. I can't remember the last time a game genuinely moved me. Sure, I was shocked by the death of Aeris way back in 1997, but the power of that scene comes from Nobuo Uematsu's masterful piano piece, the heartbreaking "Aeris' Theme," and not the death of Aeris herself (who was barely a character). Games rarely match the emotional power of film, or literature, or drama, and that's fine! Because they rarely strive to (which isn't to say they can't or are unable to). And so I wondered why it was that this scene, spoken by a character who annoyed me, speaking about other shallow characters I didn't care much about, could really affect me.  And I suppose I forgot about some of the basic principles of fiction - you know, archetypes, character arcs, catharsis (no worries; I won't be throwing any Aristotle at you).

There is a certain 'mode' of viewing for every artistic medium. For the media that is part of out cultural DNA, it's something we don't even think about - it's an unconscious recognition of various forms and storytelling devices. Like understanding that Ancient Greek nudes are not meant to be sexual; or letting go of reality and accepting that a murderous Victorian English barber suddenly breaks out in song; or ignoring the massive plot holes in any number of mysteries of thrillers or action movies. It's a combination of suspension of disbelief and an unconscious knowledge of the devices that each respective medium employs in an attempt to reach its conclusion: emotional catharsis for the characters (and thus the audience).

Anime is particularly important in this regard - for us in the west, myself included, the mode of viewing required is not necessarily innate in our culture, and those looking from the outside in are often baffling by "anime style." Things like action lines, and big eyes, and the way the characters seem to grunt and gasp and make so much goddamn noise. It's important to note that anime makes use of very broad archetypes and a very standardized form of visual and aural language; so we know that big eyes are not (always) meant to be cuteness for its own sake, but are meant to invoke youth, which signifies the role that character has in relation to the story and its world. We know this character might not be literally sweating, but that the sweat bead is meant to represent an emotion in reaction to a situation - visual shorthand, if you will. Anime uses broader strokes than most other mediums - but that's Japanese style for you, and we can see the same methods used in their traditional dramas, in their paintings, in the bold violence of a Kurosawa battle scene, in the simple lines of a haiku poem, and we can probably trace this all back to the general principles of Zen but holy shit this is supposed to be about video games damnit what is wrong with me - 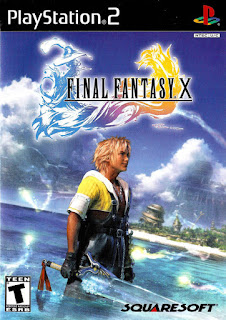 What I really mean to say is that Final Fantasy X is the most Japanese entry in the series, and it starts with the story and characters. It eventually occurred to me that the seemingly shallow party members aren't really meant to be considered fully-rounded characters; they're designed to hold fast to their archetypes, and their power lies not in their individual traits, but in how they play their role in the groups dynamic and the story spread across some 50 hours. The stoic warrior; the grizzled veteran; the older ice queen; the naive-but-sincere moron; the spunky brat; the self-serious, hesitant young woman. Sound familiar?

Other games in the series, and the genre, follow a similar pattern. But in, say, FFVII, most of the characters exist as caricatures until lengthy flashbacks detail their backstory and motivations before they go back to being caricatures (a method that works with varying degrees of success; secret characters like Vincent and Yuffie are actually given more interesting and developed backstories than some of the main cast like Tifa or Cait Sith). Not so in FFX; characters begin as caricatures, sure, but we rarely see any major flashbacks that are solely intended to develop a single character. Rather, we pick up bits and pieces of each character's history, which weaved in and out of the main narrative in a much more organic fashion. It's expert storytelling, but the problem is that this main narrative is nearly 50 hours long, and for much of the game you'll be wondering why you should care about these cardboard cut-outs. Ah, but when you near the end - even as the minutia of the plot gets even hazier and more bogged down in JRPG mystical nonsense - the realize the game has spent 50 hours slowly and patiently developing these characters with the conclusion, and catharsis, in mind. The problem with "visual shorthand" is that a lot can get lost in translation, and it's as much cultural as it is anything else. Which is why English dubs, in any medium, can be so offputting, and it's why, I guess, weeaboos scorn English dubs with a passion to shake their mothers' basements. What's impressive about FFX's acting is that it improves as the game goes on - and as you organically come to understand the characters better, the seemingly stilted acting makes a little more sense (most of the time, anyway). When I first booted up the game - the excellent HD remake on Vita - I thought, "Jeez, why does Tidus have to be so goddamn shrill?" But his voice gradually becomes less shrill, over the course of some 40 hours, and less annoying - in tandem with how his character develops and matures. That's quality storytelling right there - it's a slow burn, for sure, but it is rewarding.

The same goes for other characters as well. Hearing Yuna speak confidently later on is key to understanding just why the acting seems so terrible early on. Auron doesn's speak like a poor Wolverine imitator just to be cool and tough - it's because he's wounded and, you know, actually dead. Likewise for Lulu, and later one, as we learn more about Wakka's beliefs and character, you wouldn't be able to imagine a different actor for what was previously an annoying character. Which isn't to say it's all good. Nearly every secondary character and NPC has some downright atrocious acting (except for that old historian you run into often) - from Seymour and Jecht to Cid and (especially) the child actors. And while the way character development is presented is expertly done, it still requires a commitment from the player - and those early hours can be dull as hell.

It's ironic how the character development gradually grows tighter and more absorbing while the larger plot takes the opposite turn. It starts off well enough; Tidus is magically transported 1000 years into the future, and we're introduced to the main thrust of the game: the summoner's pilgrimage to destroy Sin. I like how single-minded it is, especially after the rambling and vague plot of FFIX or the drastic turns that FFVIII took every so often. It serves the game well - what, you want to go running around on an overworld map? Too bad! You're on a pilgrimage, damnit, no time for that (I guess we have time for some elaborate minigames, like underwater soccer - it just wouldn't be Final Fantasy without them). It's no secret that FFX did the whole "run down the corridor" thing long before FFXIII did. Sure the linearity is still stifling and rather dull, but at least it makes sense within the context of the plot itself. A plot which isn't particularly interesting, it might be said. There are plenty of times I wished I could have forgotten about it and explored the interesting world instead. I did say this was the most Japanese entry in the series, and I meant it. A small group of watery islands (not the sprawling continents of games past), constantly threatened by an unstoppable earthquake/tsunami monster - gee, sound like any country we know? Even Spira's fictional religion has more resemblance to eastern religion than the usual Catholic slant of JRPGs (well, except for those Gregorian chants playing in the temples).

There is some potential for a powerful (and obvious) metaphor, but it quickly gets bogged down in typical Final Fantasy nonsense. An unstoppable environmental threat is not enough - no, this is Kitase/Nomura age of Final Fantasy, and we need an overly effeminate villain with mommy issues to shake things up. And while Tidus initially provides a fresh pair of eyes for the audience, the details of his story later on - he's a dream, or something? - are as absurd and vague as the series gets. And the pacing is about as lopsided as anything this side of Xenogears. Ah, but those are minor complaints, really. Ultimately the game is a major slow burn, but when it pays off, it goes big. All screenshots are my own, taken from the Vita port. Box art from GameFAQs.
Posted by touchofkiel at 4:43 AM