Your best girl has been kidnapped by a gang of thugs whose members number in the hundreds, and the only way to reach her is to engage each and every one of those gang members in hand to hand combat. As luck would have it, your fists never tire, and your enemies have the physical constitution of wet tissue paper. I know - isn't this the setup for Double Dragon? And Final Fight? And...

And Kung-Fu Master. Some people consider this be the first beat-em-up. I do not. But the whole point of dissecting a game like this, I suppose, is to trace genre lineage; the game holds very little appeal, taken by itself, today. Those who would claim it as such have a point: it's the first game of its kind, in the martial arts craze of the late '70s and early '80s, one that pits a lone man with a penchant for vigilante violence against a veritable army of thugs who engage in (mostly) unarmed combat. It doesn't mean that you're an unstoppable force - far from it - but by giving the hero some seriously powerful fists (and feet), and by making the enemies so laughably weak, it empowers the player more than any other genre of the time. Consider, say, Mario in Donkey Kong or your ship in Space Invaders or the titular Frogger or Harry in Pitfall or any other countless arcade heroes of the early '80s - they all share the same weakness: namely, that they're weak. Each of those heroes is no stronger than his enemies. 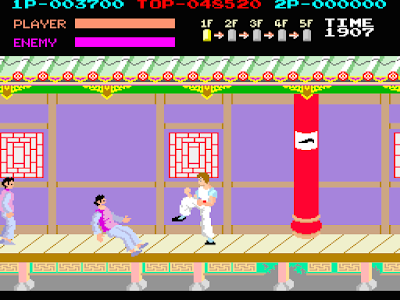 Kung-Fu Master's Thomas is no Superman, to be honest, but the ability to dispatch so many enemies, so quickly - enemies that at least look the same as him, it should be noted - is an important part of what makes this game so essential. Other arcade games relied almost entirely on dodging and avoidance - in Kung-Fu Master, your only option is to literally punch your way through the scores of enemies that approach you from both sides. Which is the basis for the beat-em-up genre - and pretty much all action games thereafter.

Playing the game today has its own sort of hypnotic power. Your attacks are limited to a single punch and kick (which has a longer range, but gives less points); most enemies go down in a single hit. Thomas is literally swarmed by enemies as he progresses through the game's Chinese-styled tower to save his girlfriend from "several unknown guys." If that sounds rudimentary, that's because it is. Two things give Kung-Fu Master its own unique flavor. Enemies attack from both sides, which shifts the feeling of the gameplay a bit - the player must always be aware of attacks from both sides, and so the crux of the game is on timing your attacks from either side. Hand in hand with this mechanic is that Thomas' speed is that of a leisurely stroll, while enemies rush at him at about three times his own speed. Which means that you must pay attention to enemies approaching from behind; otherwise, it would be too tempting and easy to simply punch your way forward. This concept also makes progression feel a little slow - and at the same time, more rewarding. More than just providing the foundations for the brawler genre, the game is also an interesting example of a medium in transition. Released in 1984 - a year after the Famicom and a year before the US launch of the NES - Kung-Fu Master is a game in between the arcade-style simplicity and the deeper, more measured pace of console games (much like 1982's Pitfall did for platforming). The fact that dying resets the level paints it as an arcade game - where you take a single quarter to see how far you can make it in a single run - but its relatively complex set of moves (ducking and jumping included) is more akin to something we would see later on consoles. Not so unlike the medium's first fighting game - Karate Champ, also released in 1984. I don't consider Kung-Fu Master a proper beat-em-up, which to me is always signified by 8-direction movement. But that's merely a semantic argument; whether you consider it the first of its genre or not, there's no denying that Kung-Fu Master built the foundations upon which the genre was built, and is an important game in the development of video games as a whole. The game was a launch title for the NES in 1985; like a lot of those games, it was sort of poised between the arcade-style game that the Atari 2600 specialized in (tellingly, the game also saw a rather impressive 2600 port) and the deeper console experience. It doesn't really hold much interest as an NES launch title - it's a pretty faithful port, but even then it would have felt vaguely limited, even primitive. But then again, we might say the same about most of the other NES launch titles - they were, after all, in direct comparison with the greatest and truest expression of console platforming - some game about plumbers or something, I forget. The game was released in Japan as Spartan X; in 1991, the Famicom received its own exclusive sequel. Spartan X 2 looks and plays better, and has a vaguely futuristic feel to it. For one thing, its environments are vastly more diverse than the tired old tower of the first game. And it plays better than the original - same moves, but more responsive in general. But then you remember - this is a 1991 release - the same year that saw impressive graphics and classics like Crystalis and Ninja Gaiden (to say nothing of the three competing 16-bit consoles). A prettied up version of an eight-year-old arcade game was pretty unacceptable.

In the meantime, developer Irem released Vigilante for arcades in 1988. Wikipedia calls it a "spiritual sequel;" I'd be almost inclined to think of it as a remake of Kung-Fu Master. The gameplay hasn't changed much - you can pick up nunchaku - but the enemies and bosses are more varied. The game's aesthetic also de-emphasizes the increasingly unfashionable martial arts angle in favor of the gritty New York street style; this game was released a year after Double Dragon, after all. The plot is ripped wholesale from Kung-Fu Master - just like the terrible, unresponsive jump command, and the enemies swarming from both sides. One key difference is that some enemies can take multiple hits - which is downright frustrating, when trying to combo a few punches on one goon while another grabs you from behind (one weird thing about all these games is that the unarmed enemies don't attack, but merely grab you and drain your health bar - or open you up to an attack from a gun or knife). It's an idiotic decision that's made worse by the woefully inconsistent hit detection - have fun seeing your kicks not register against the bosses, as you watch their health bar regenerate... Vigilante at least uses one little trick I wish I saw more of - it uses thick black outlines for its sprites. It gives it a vaguely comic book feel, and certainly helps it stand out against the wave of other urban brawlers of the late '80s. The game also saw a port for the US launch of the TurboGrafx-16. Much like the NES launch title Kung-Fu, it's a mildly impressive and faithful arcade port that pales in comparison to the deeper console experiences of its competition; it certainly doesn't help that the game already felt dated upon its original arcade release in 1988. The game's text likes to emphasize how necessary it is for you to rescue your girlfriend outside the confines of the law. A rather blase attitude towards the inefficacies of modern law enforcement... All screenshots are my own; box art from GameFAQs.
Posted by touchofkiel at 3:01 AM